The story of the last Russian Monarch sets the stage for this magnificent epic musical.
The love of Nicolas and Alexandra endures in the face of political intrigue,
jealousy, greed, and revolution.

Deborah Johnson has created a miraculous thing in TSARINA—a totally original musical, with an excellent book and lyrics, mostly by herself. It is definitely a rave and worth consideration. Please check out the persual materials. I have had the privilege of being a part of the development, as well as observing the World Premiere performances.

Theatrical Agent for 20 years, produced & directed touring musical and family theatre productions, past Board President for the Group Rep at the Lonny Chapman Theatre in Los Angeles and an active Dramaturg QUEEN VICTORIA: Ruler of the Free World. Grandmother of Alexandra.

TSAR GREGORY: Father of Nicholas. Large man who was afraid to go outside the palace.

Score and Book available for purusal. Cast of 17 with doubles. Easily enlarged to 50 or more for larger ensembles

In this brief course, We first cover some of the main historical events that happened around the time of the Russian Revolution under Nicholas II, last Tsar of Russia in the late 1800’s to early 1900’s. There were some tragic events that happened during that time, especially to the royal family. This is history that can’t be changed or erased.  Includes 5 videos & 8-pg. study guide!

The story of the last Russian Monarch sets the stage for this magnificant epic musical. The love of Nicholas and Alexandra endures in the face of political intrigue, jealousy, greed and revolution.

TSARINA is a musical based on the true story of Nicholas and Alexandra, the last of the Romanov Russian Monarchs. The mid-nineenth century was a time when political treachery, greed and supersition abounded in Europe and Russia, and religious beliefs and traditions were challenged. The couple's devotion transcended incredible odds, and their love story remains one of the greatest romances of all times!

Get Your Perusal Copy  Now!

HOW DID WE GET HERE? Opening song that bookends the show, starting and ending in the cellar, where the Romanovs met their fate. (Nick/Alix)

OPERA DANCE Tsar Gregory and Nick attend the opera house where the company dances and sings. Negotiations are made with Princess Helene to be the future Tsarina. (Instrumental/Company)

IMPOSSIBLE Grigori is thrown out of the monastary by the Abbot. (Grigori/Abbot)

I WISH FOR YOU AND I Nick and Alix have now been writing each other almost every day, Nick in Russia and Alix in Germany sing this duet, though miles apart. (Nick/Alix)

HOLY MAN Grigori claims he is a "Holy man" as he begins making his way to the Romanov palace. (Grigori, Women's Chorus)

IF ONLY YOU BELIEVE Tsar Gregory challenges his son Nick to stand up and be ready to rule the world as the future Tsar. (Tsar Gregory)

RICHER THAN I Princess Helene, Alexandra and Grigori are all now making their way to the Romanov palace with different agendas, both Helene and Alix to be the future Tsarina and Grigori to influence the Royal family. (Helene/Alix/Grigori)

FATHER The death of Tsar Gregory makes Nicholas the Tsar and ruler. (Nick/Konstantyn)

MORE! MORE! MORE! GOD SAVE THE TSAR The people are calling out to see their new Tsar, Nicholas. (Company)

UNDYING LOVE Alexandra arrives at the palace and Nick and Alix declare their Undying Love for one another. (Nick/Alix)

FATHER/KONSTANTYN Konstantyn, who was Tsar Gregory's advisor and now Nick's advisor, is not happy with Alix's influence on Nick. (Konstantyn)

WEDDING DANCE Takes place at Nick and Alix's wedding. The whole wedding party breaks out in a dance, but events outside the palace are not as festive as people outside the gates are shot. (Instrumental)

DAUGHTER'S PRAYER During this song, Alix prays for a son and has four daughters. The nanny, Oksana, has a son named Edward who would grow up to love Tatiana, daughter number two of Alix. (Alix/Oksana)

HOLY MAN RECITATIVE Alix again prays for a son and Grigori enters to answer her request and prophesies that she will have a son. (Alix/Grigori)

MY SON MUST NOT DIE Alix finds their son has the curse of hemophilia. Grigori claims that as long as he is alive and around, their son will not die. (Alix/Nick/Grigori/Doctor/Oksana)

When Act 1 concludes, Russia is at war. NICHOLAS and ALEXANDRA rejoice in the blessed birth of a son, yet the child is a bittersweet gift. The boy is afflicted with the blood disease carred through the Romanov's royal line, hemophilia.

MORE! MORE! MORE! Uprising of the townspeople with Nick shouting to just "wait" and follow his lead. (Company/Nick/Konstantyn/Viktor/Edward)

THE INTERNATIONALE Turning point of townspeople to Bolshevism (Company)

MY SOUL IS EXALTED Reprise. Queen Victoria appears as a ghost and encouarages Alix to be wqith the people. (Queen Victoria)

NEVER SAY GOODBYE Edward and Tatiana are in love and Edward is determined to help the people, who end up as the Bolsheviks. Tatiana is afraid they will never see each other again. (Edward/Tatiana)

HOW DID WE GET HERE? The first family ends up in the basement to meet their fate. (Nick/Alix)

EVERYWHERE Queen Victoria greets the first family into Heaven's gates and they all reunite. (Company)

The story of the last Russian Monarch sets the stage for this magnificent epic musical. The love of Nicolas and Alexandra endures in the face of political intrigue, jealousy, greed, and revolution.

Ass't to the Producer: LIS JOHNSON

"How Did We Get Here" by WAYLAND PICKARD & DEBORAH JOHNSON Tsarina is a musical based on the true story of Nicholas and Alexandra, the last of the Romanov Russian Monarchs. The mid-nineteenth century was a time when political treachery, greed, and superstition abounded in Europe and Russia, and religious beliefs and traditions were challenged. The couple’s devotion transcended incredible odds, and their love story remains one of the greatest romances of all times!

TSARINA can be performed with as few as 17 actors-with doubles or up to 50 or 60 for a large troupe. You can apply to recieve this limited edition porcelain antique reproduction doll to auction off to your group as a special fundraiser. (click on photo for full size) SONGS on STUDIO CAST RECORDING: Raz-ma-taz • Who I Was Meant to Be • Dishes, Dolls, Dresses and Dreams • What is Love? • Suitors Three; Impossible! • If Only You Believe • I Wish for You and I • Jilted • Undying Love • So in Love With You • Wedding Dance • Holy Man • Never Say Goodby • More! More! More! • Song of War • Richer than I • I Need You • I Remember • Glory Road 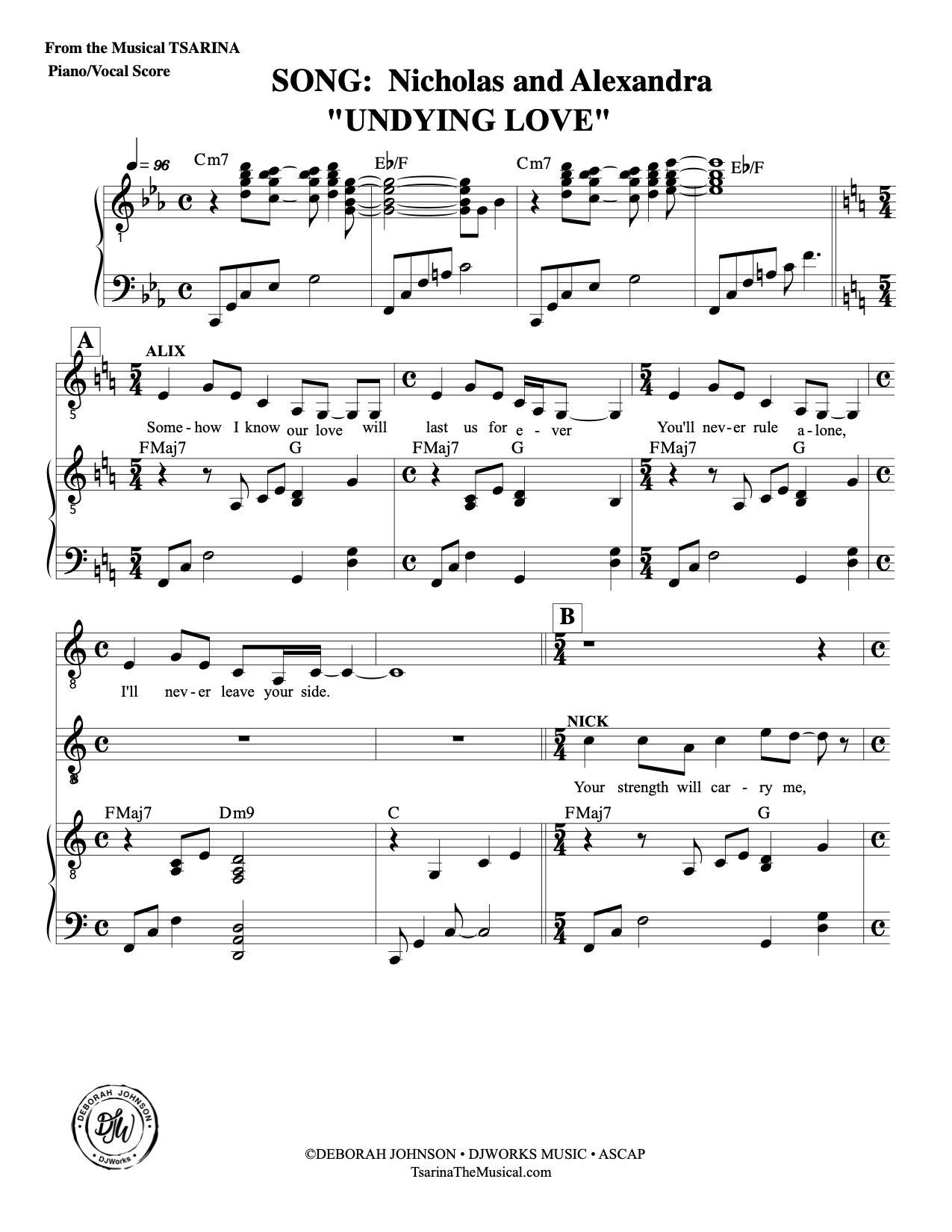 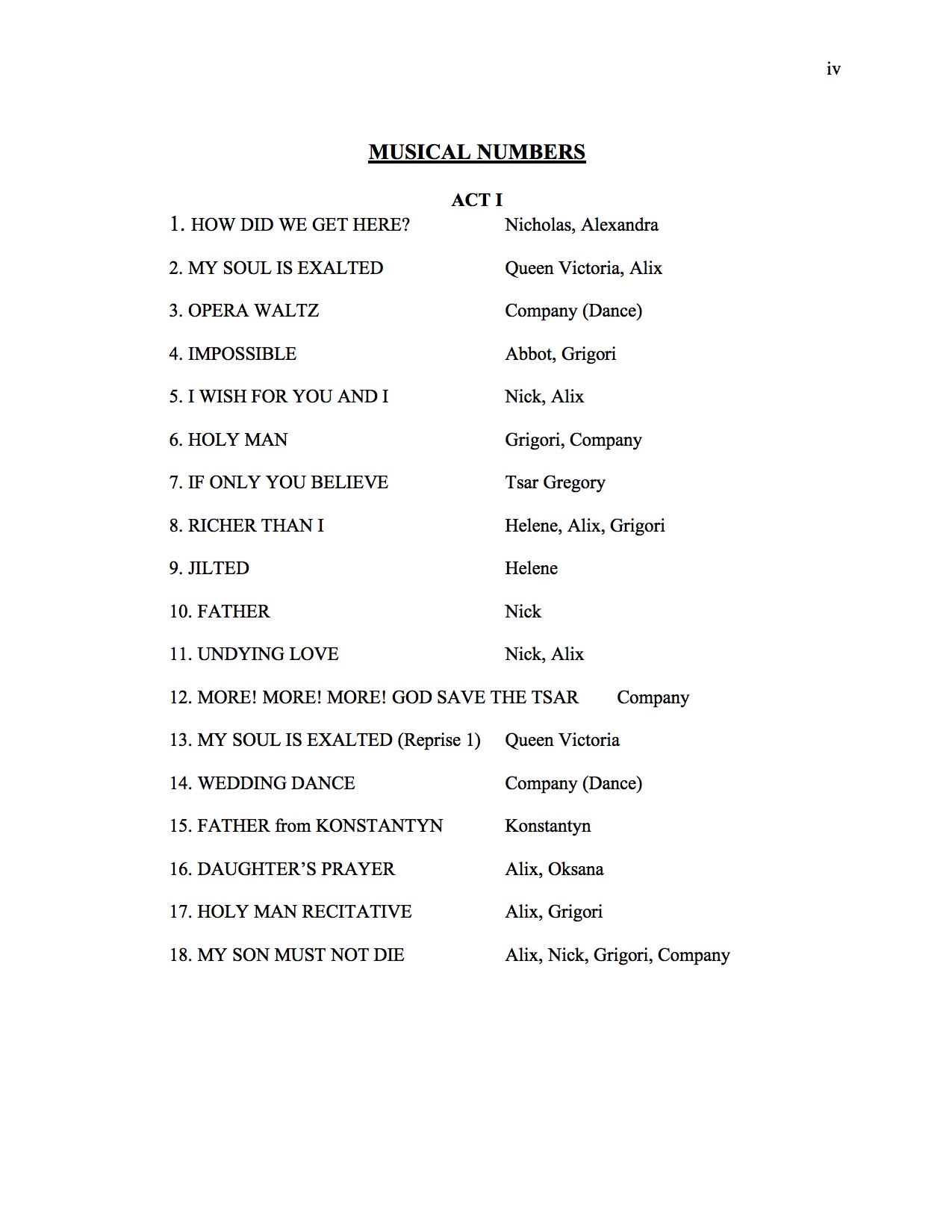 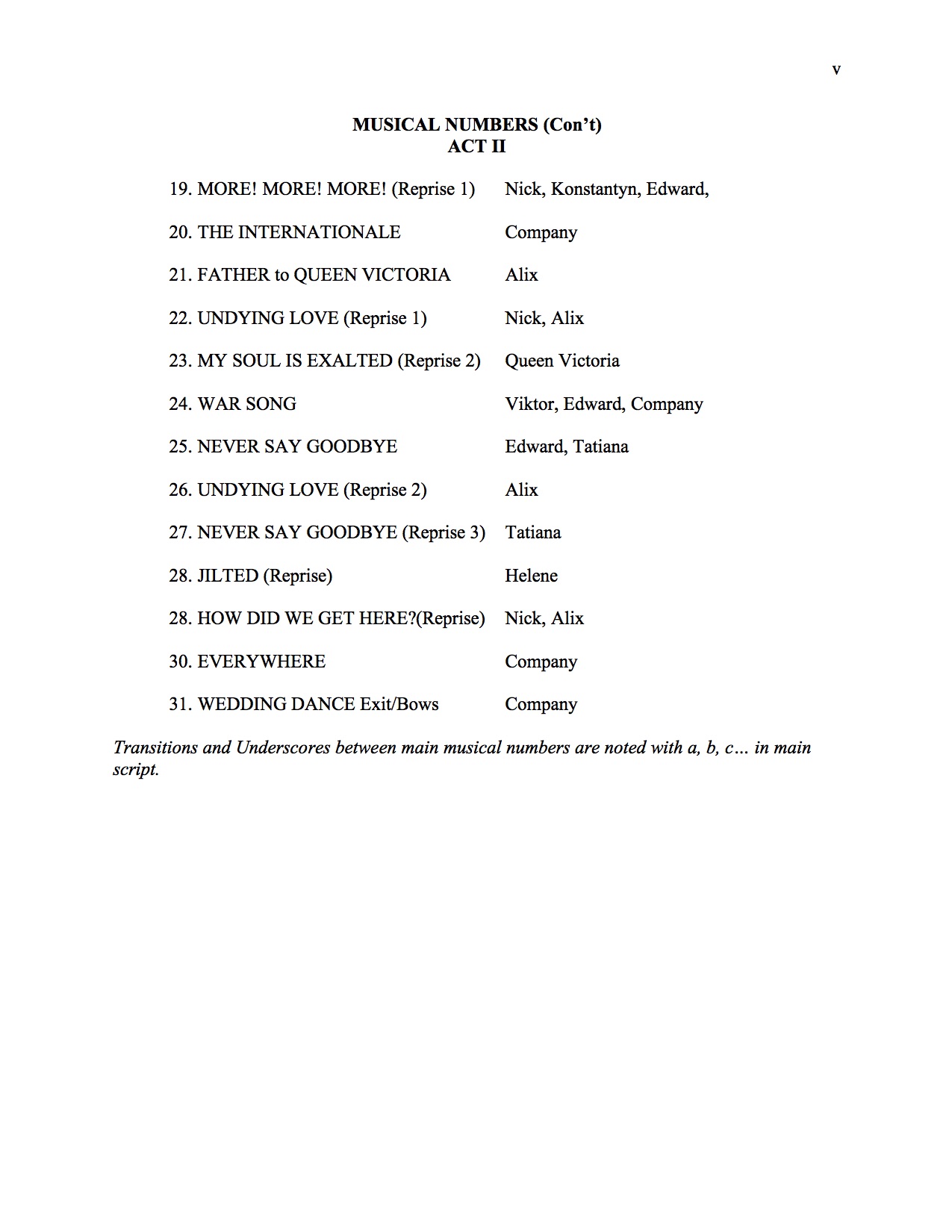 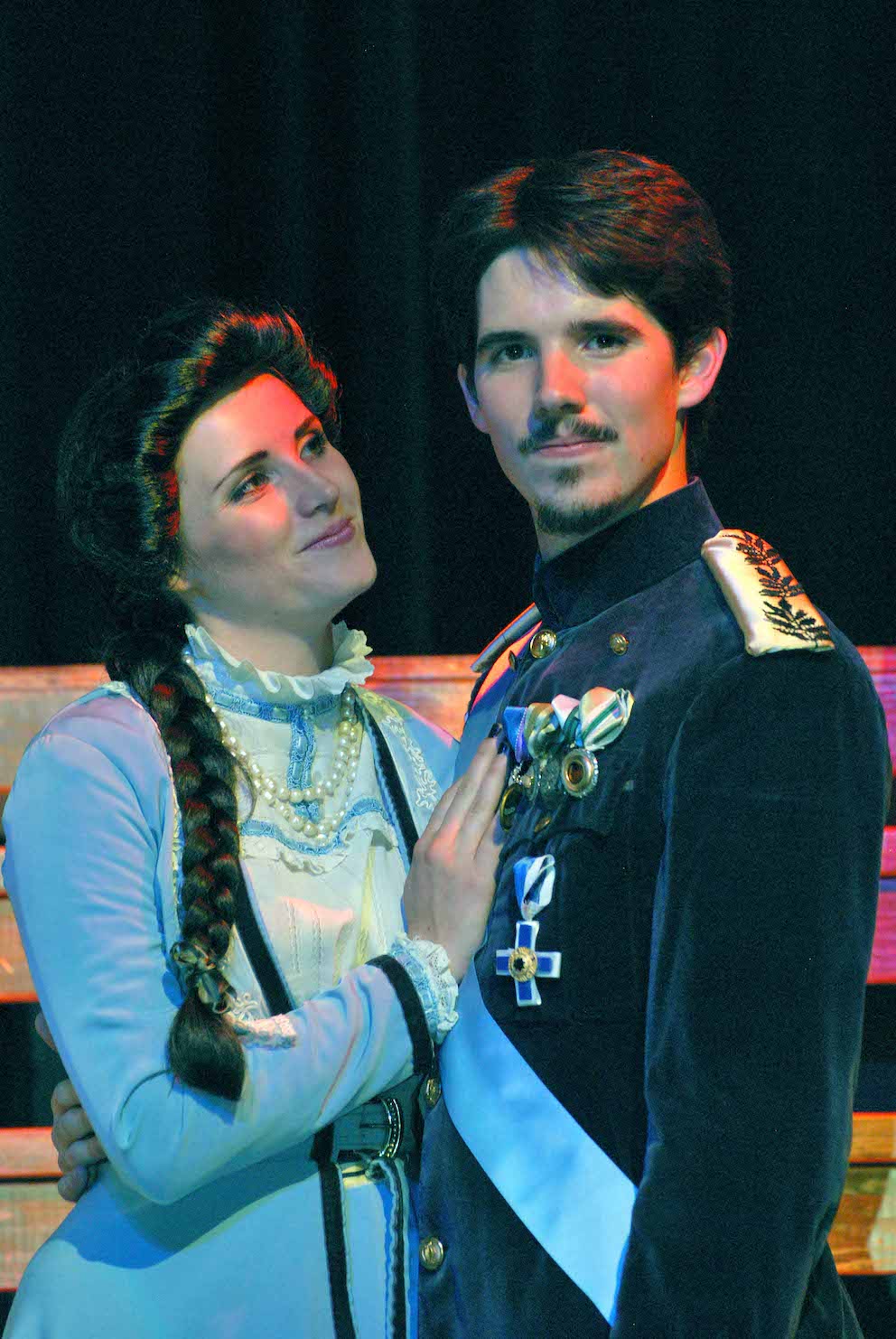 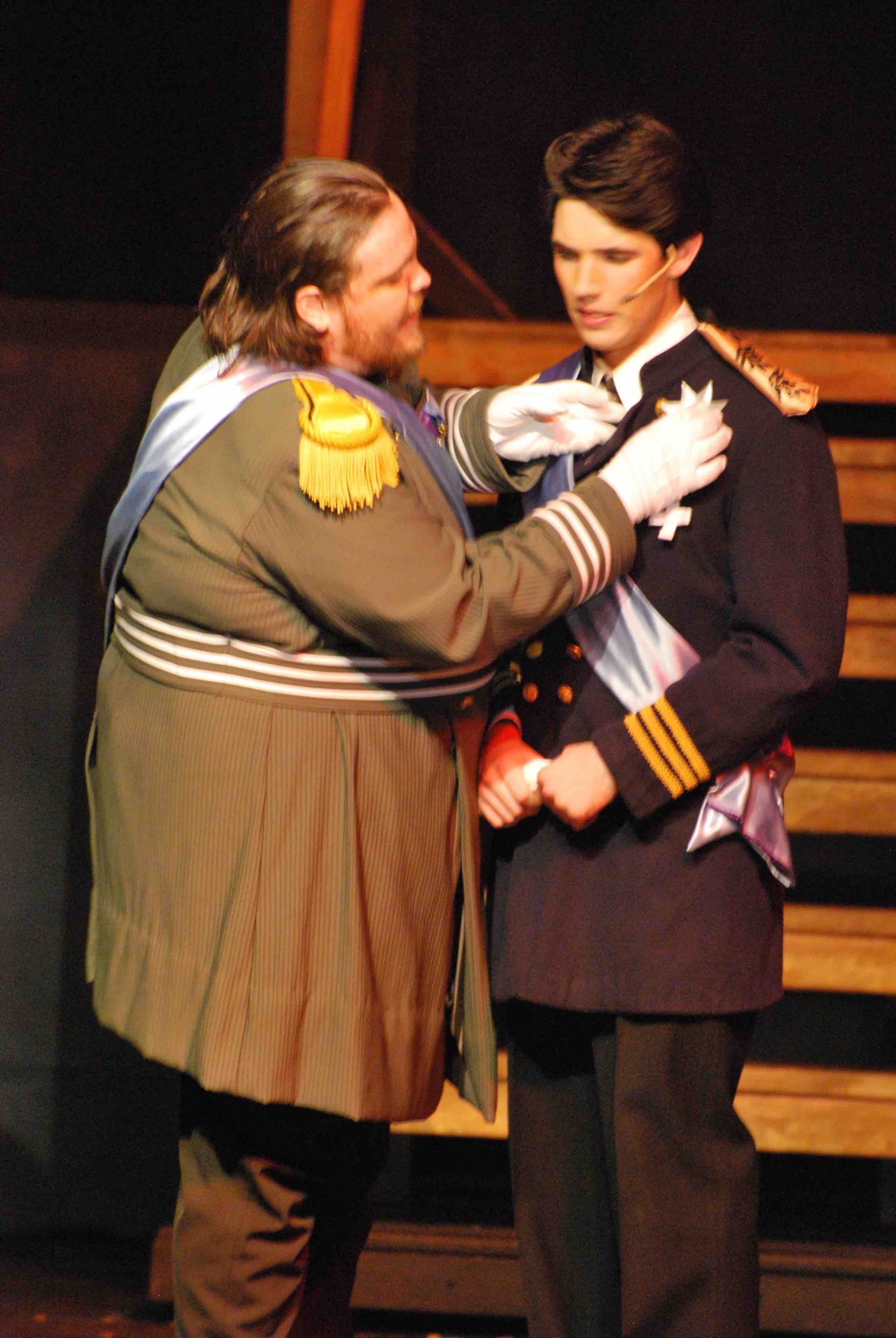 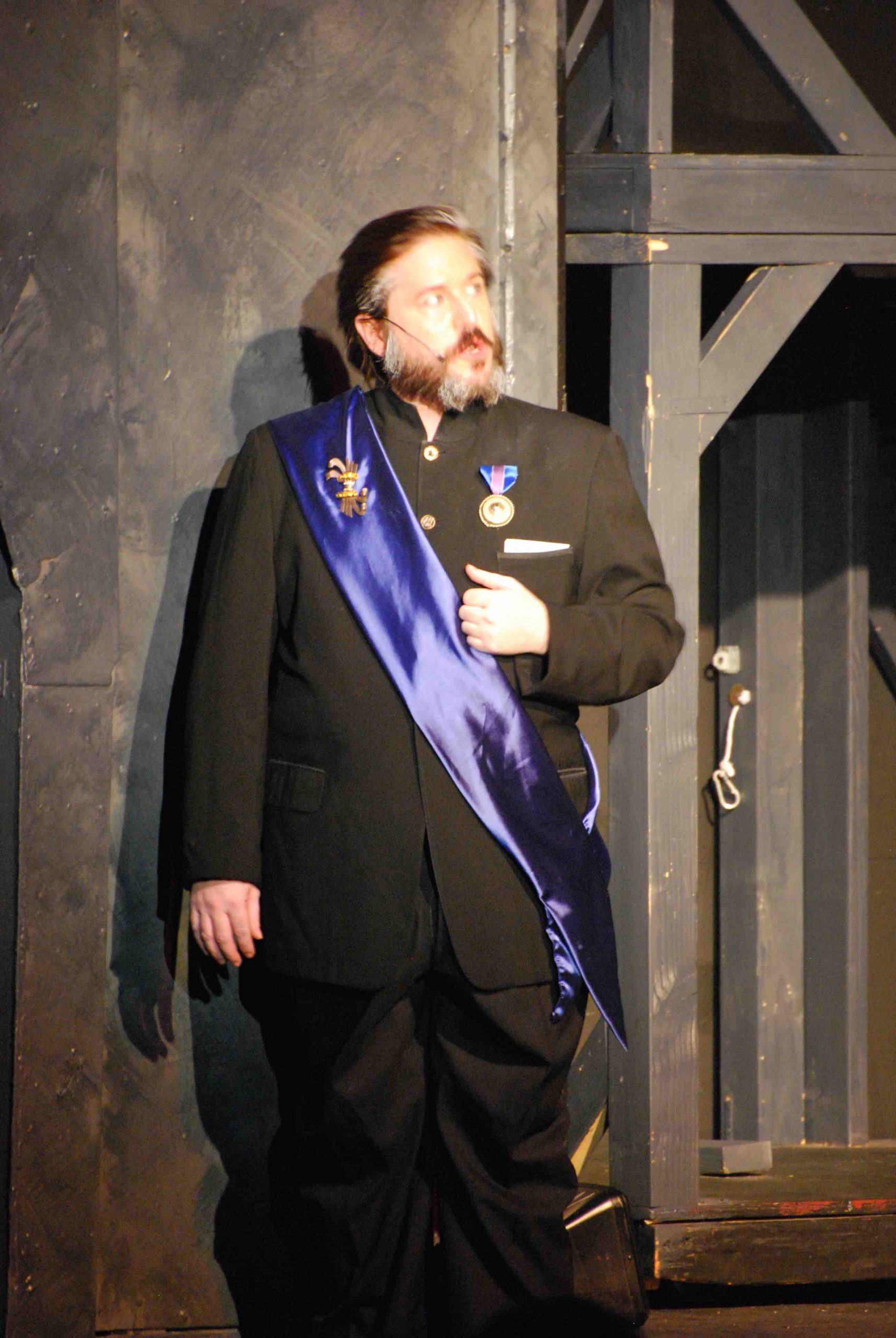 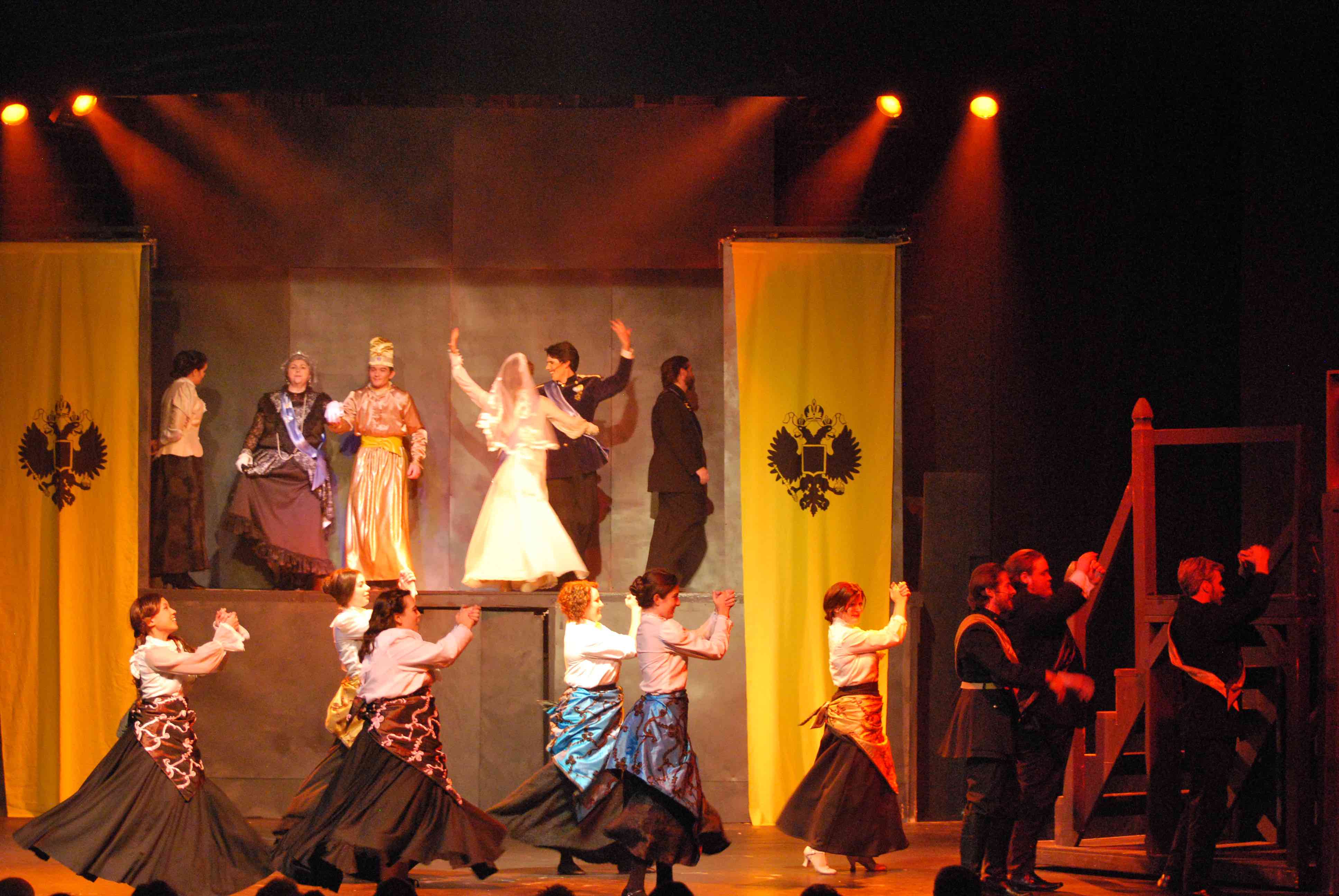 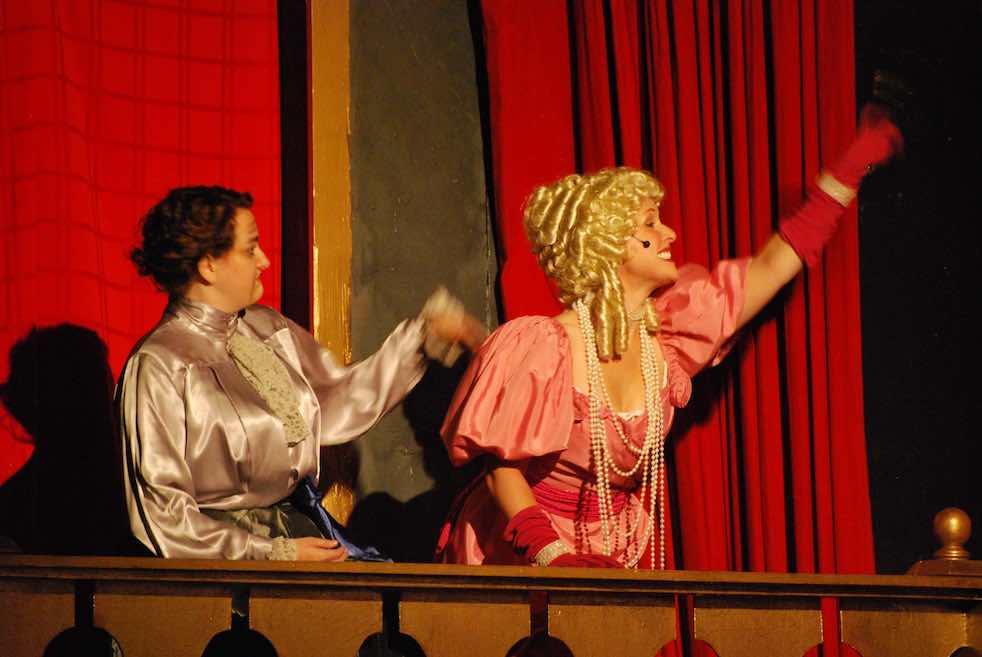 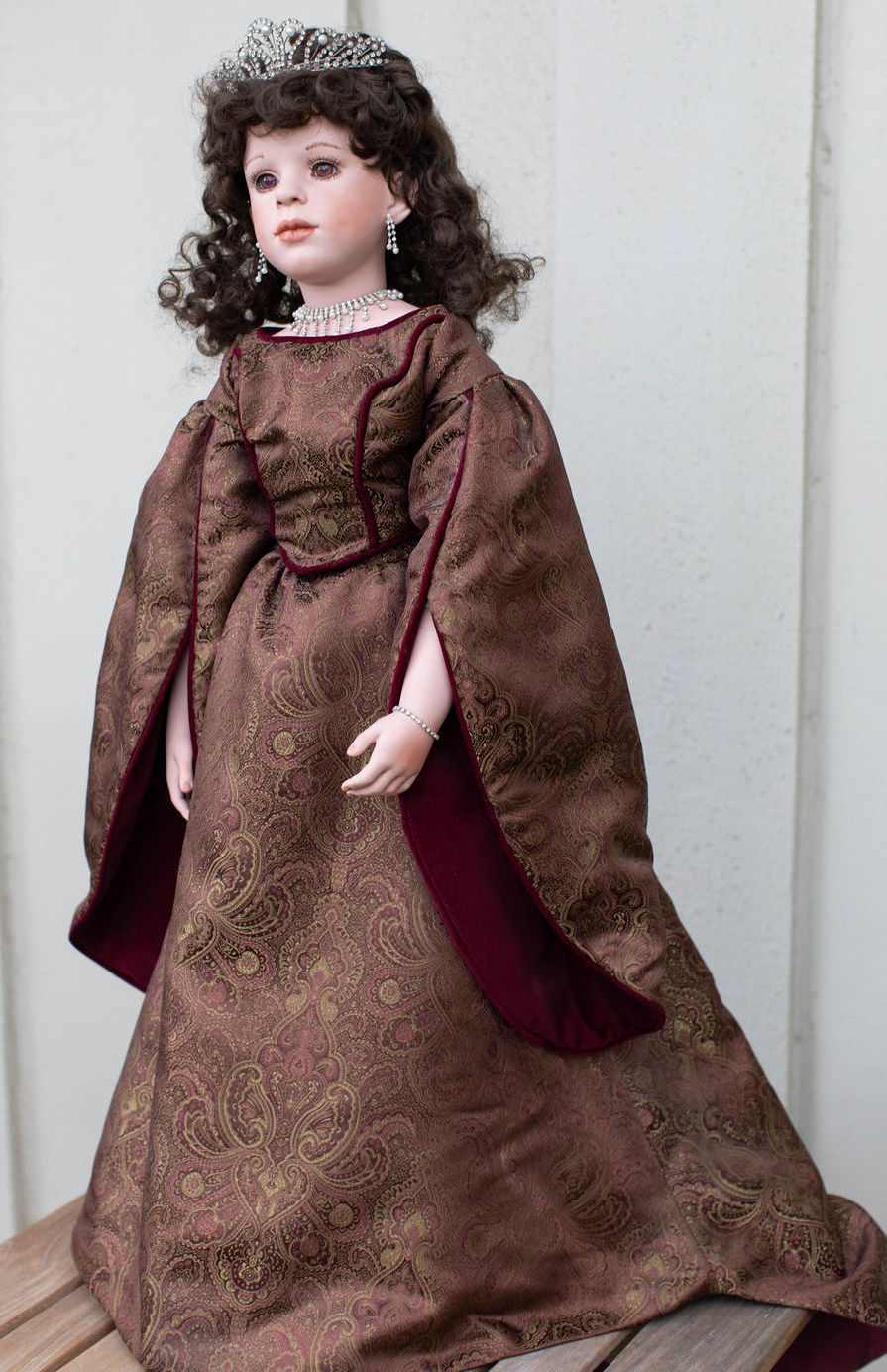